Caspar says that his focus is on telling a story in as short a manner as possible. There were many instances of overlapping text, almost to the point of unreadability. Also lots of things made from other things. Very bold colors and use of white space.

I was excited to work in this style, but stuck for a topic until my husband mentioned the Twitch streaming channel he was setting up to stream his music creation process. The image popped into my head instantly and the poster came together very quickly. 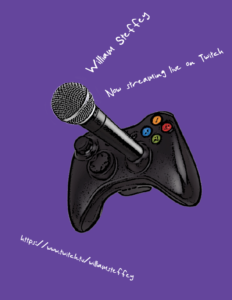 This one was tricky. There wasn’t as much that jumped out to me apart from the fact that all Fang Chen‘s posters are black and white (representing yin and yang). Also, I had a half-formed idea in my head from the improv show I’d seen the night before. I went ahead and explored my idea, working in black and white as a nod to the project.