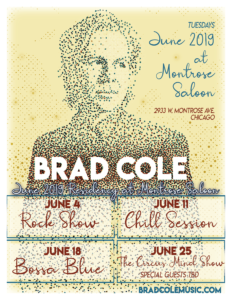 I’ve been busy lately, and that includes posters. A friend who is a music publicist put me in touch with Brad Cole, who will be playing a residency at Montrose Saloon next month and I made him some posters and social media graphics:

I’ve made a lot of posters, but I haven’t really worked like this with a client before. Usually, I’m either just adding some text to an already-designed poster or the client knows me well enough that I just have free rein. I don’t actually know the correct design process.

I sent Brad some fairly bland samples to get a feel for the direction that he wanted to go in, but none of them clicked. He sent me back some examples of things he liked and I we sort of agreed that, with the time frame we were under, a stylized photo would be a good middle ground between something unique and something obvious.

Now that I’m working an office job full time, I do a lot of doodling in meetings. And that often means making gradients out of dots with text in the negative space. I did that for this picture, using three colors. A medium tone over the whole image, a darker tone for shadows and a bright tone concentrated around the text. There’s a big difference between idly doodling dots while watching a webinar and filling a page with them when it’s your job!

One neat thing about how I made this is that each Photoshop layer only had one color on it, so it was easy to provide color variations. If you go to Montrose Saloon, you’ll see the poster above as well as one in a silver/yellow color palette. 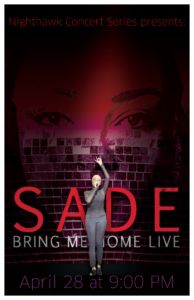 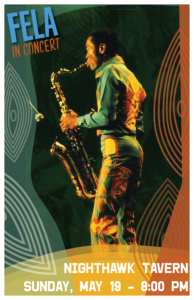 My other main poster outlet is Nighthawk Tavern‘s monthly Concert Series. This is the thing where I normally just add some text to what’s already there. There wasn’t much of a poster for Sade: Bring Me Home Live though, so I composited a few images, including a disco ball, and I was very happy with the results. The Fela In Concert assignment came up right after I finished Brad’s posters, so I was feeling good about my skills! I took the main image from the original media and then added the side elements inspired by Fela’s super cool suit!