This month, I participated in the Inktober Challenge. It’s a popular online challenge to make an ink drawing every day of October based on a series of daily prompts. There are different sets of prompts and different places people post art, but I stuck with the main list and shared my work on my Instagram. This is the fourth year I’ve started Inktober, but it’s the first time I finished. I learned a lot: 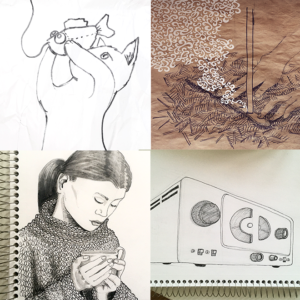 These four drawings are representative of where I was starting from.

I started late on the first day, so an elaborate scientific drawing of a trout wasn’t an option. Cats are always fun to draw, so chose to show Henry playing with his Fish on a string. It’s more gestural than anatomical, which puts the attention on the fish.

My drawing for Wisp was inspired by the artist Mina Ahmadi, who combines representation and pattern in very effective ways. I started with brown paper, planning to make the smoke pattern with a white pen. Instead I ended up adding it digitally, which was a technique I revisited as the month went on.

The Bulky drawing is all about the texture of the girl’s sweater. This would have worked better as an exaggerated, cartoonish style, but I wasn’t there yet. I exaggerated the perspective of the antique Radio I drew, but again, I could have gone more extreme. 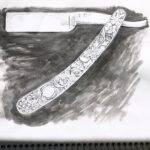 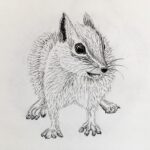 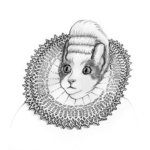 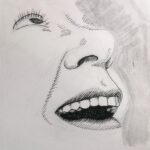 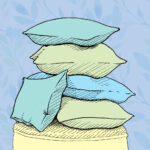 Although I took a lot of time with the Radio drawing, the straight razor (Blade) was the first drawing where I didn’t let myself rush the details. Rodent is simply done, but I’m getting better at reproducing my reference. For the Fancy drawing, I let myself have a little fun. I composited a reference image in Photoshop and drew from that. I’d have liked to take more time with the details of the ruff of the collar, but that’s not always an option with a daily deadline. Teeth and Throw are… just ok. 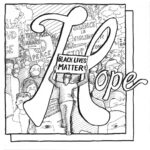 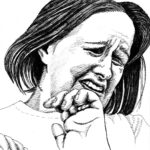 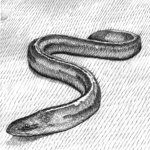 I’m very pleased with the drawing for Hope, if not every detail. The effect I was going for was that of a medieval illuminated letter. I think I captured the spirit of that with a contemporary twist.

I was nervous about the prompt Disgusting as I have a low threshold for anything grotesque, and I didn’t want to draw anything too unpleasant. For the same reason, I wasn’t looking forward to what I’d be seeing on my IG feed, so I drew myself looking disgusted. This solved both problems and had the added advantage of letting me go a little bolder with the shading without worrying it would be unflattering.

Around this time, I read about the slight controversy surrounding Inktober. Turns out the guy who came up with the idea [allegedly] plagiarized another artist’s book in his rush to monetize his Inktober copyright(!) To learn more, I ended up watching tutorials of the plagiarized teacher, Alphonso Dunn. So inspired, I took great care in shading the eel I drew for Slippery and it’s one of the better things I’ve done. 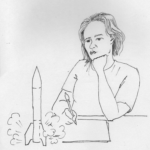 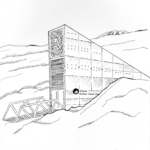 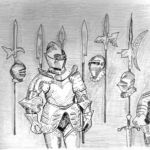 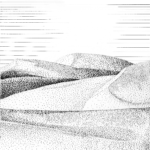 Still inspired, I tried the stippling technique for the drawing of a sand dune. It turned out nicely, but took way too much patience. I don’t see a lot of stippling in my future.

For Armor and Outpost, I focused less on shading technique and more on getting a nice copy of my reference images – The Armor room of the Chicago Art Institue and the Svalbard Seed Bank. Rocket should have been easy prompt to run with, but I drew a blank. Literally. 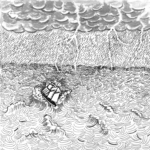 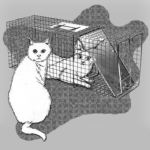 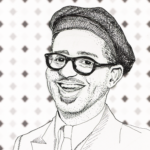 My Storm drawing was another attempt at ink shading techniques. I’d read Beginning Pen & Ink, by Desarae Lee and I liked the dark moody effects she’d achieved with shading. I didn’t get quite there, but I tried.

The Trap drawing was another turning point for me. I made several attempts to draw that humane cat trap and finally decided that it wasn’t a skill I wanted to master. I’d drawn the cats how I wanted them, so I combined them in Photoshop with the actual image of the trap and I was very happy with the result. I kept to this digital/hybrid theme with my young Dizzy Gillespie (diamonds for the album Dizzy’s Diamonds) and for Coral, using the Wikipedia article on coral’s threatened status as a backdrop for my drawing. 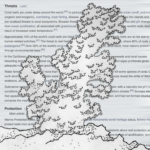 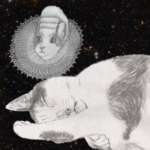 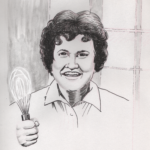 When I drew Julia Child for Chef, I couldn’t think of a good way to incorporate a digital collage. I did however, get a decent likeness of her in a very short time and began to notice how my skills were improving. 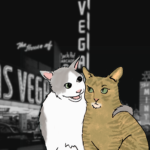 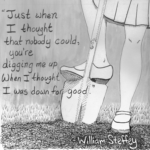 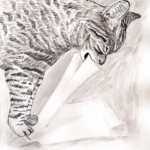 Rip is another one I’m very proud of. I don’t know if you’ve ever tried to draw a tabby cat, but it’s not easy. Their coloration is meant to trick the eye and be vague and dappled. I got there in the end though. Henry the cat was even kind enough to attack and destroy some of my papers so I could get a nice reference photo. For Dig, I couldn’t resist a little William Steffey shout out. I have a plan to make a series of drawings based on WS lyrics, and this was a practice run for that.

The Buddy drawing, while simple, was actually very difficult for me to draw. I’ve gotten good at copying a reference, but cartoon characters require both exaggeration and simplification. It was a fun challenge though, and maybe someday I’ll make a whole panel about Henry and Jojo’s adventures. 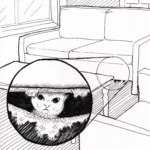 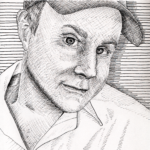 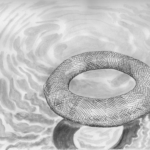 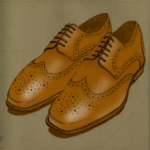 Hide was a bit of a throwaway; probably because I was already mentally focused on the next day’s drawing of William Steffey (Music ). For that post, I even put a link in my bio to an all WS playlist! I kept things simple for Float, and I captured the water effect, so I’m happy with it. Shoes was another exercise in patience, like the straight razor. It seems like a crazy amount of detail, but you simply have to break it into groups then handle each bit on its own. There’s probably some sort of life lesson in that! 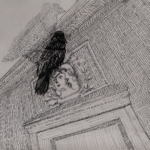 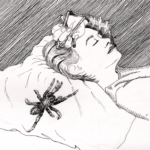 I’m pretty happy with my Ominous image of Edgar Alan Poe’s The Raven. I spent a lot of time planning it and trying to get some extreme perspective. I am happy with the level of detail in the background. I did a good job of making it dark overall, but still having the raven be the focal point.

The last day’s prompt was Crawl.  I’m glad I was able to find a way to combine it with an end-of-month post. Making it scary for Halloween was a bonus.

As a viewer of other people’s art, I definitely enjoyed those who kept to a theme all month. (Examples include @e1cassidy, @dhumeur.aquatique, and my friend Christina who is not on IG, but delighted a group Slack thread with the adventures of a somewhat violent squirrel). I’d feel great if I had a consistent enough style by this time next year to add the challenge of working to a theme.

Right now, my challenge is to keep drawing without the external motivation of a drawing challenge. I picked up quite a few IG followers this month, so I won’t be shouting into the void when I post drawings. That will help. But social media is a fickle beast. I need to keep drawing and let the work be its own reward.